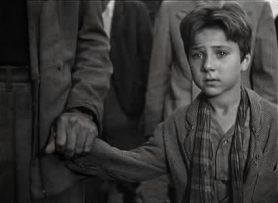 Bicycle Thieves (1948) is the story of a father and son on the hunt for a stolen bicycle. It is part of the Italian Neorealism movement and is considered to be one of the greatest films of all time.

I really enjoyed this film, I found it very easy to connect to and I think part of the reason for that is due to the use of non-professional actors – one of the conventions of Italian Neorealism. To be honest, I didn’t actually notice that the actors weren’t professional, but that is because I really appreciate acting that feels honest and true to how a person would behave in real life and that is what I saw in Bicycle Thieves.

Alongside the realism of the acting, I thought that the focus on the working class made the story more relatable. Again, this is an Italian Neorealism convention. Sure, it’s always nice to see the upper class in a film and fantasise to a point about how nice it would be to live like that, but what the majority of people, who are the working class, want to see is something about them from their point of view. Even though Bicycle Thieves is set in a different time period, it still resonates with today’s working class audience as it shows what actions an honest man would resort to in order to provide for his family.