For my end of year project I have the option of making a short film, a documentary or a web-series. The idea for this project was to use one of the scripts written for the final assessment in our Screenwriting paper. Before I wrote that screenplay, I checked with my tutor on whether it would be compulsory to use it for this upcoming assessment. I was glad when he said it wasn’t as the idea I had was one one that I didn’t want to make into a short film. I would be happy for someone else to do it, but I just don’t want to. I guess part of the reason was that it was quite a personal story, but also it was a piece of writing in my mind and that’s the way it should stay.
Instead, I would like to be able to experiment a bit with this project. I think this would be a great opportunity to try something that I haven’t don’t before. Having watched The Blair Witch Project for the first time recently, I thought that would be a genre I could have a bit of fun experimenting with. I’ve been trying to think of a story I could write in this genre that uses The Blair Witch Project as inspiration, but it’s very difficult to think of something without copying this film or others that are similar.
Another film that has been influential while finding ideas for this project is The Revenant. I thought this film was really beautiful and I found it interesting that it was all shot on a wide lens, but what really grabbed my attention was that it is all filmed using natural lighting. This really grabbed my attention as I find lighting to be quite a frustrating task. It takes so much time to properly light a scene so if I could do my project using only natural lighting it would be so much easier. That being said, I do understand that I will need to spend a bit of time researching and testing how to get the best lighting and making sure I can properly expose everything before I actually begin filming.
Before I commit too much to this, it would probably be wise to actually write a story/screenplay.

I moved recently and where I moved to overlooks Thompson’s Bush. I thought this would be an excellent location for the style/genre of film I am thinking of doing so I went for a walk yesterday to take some photos and get some inspiration.
I had one or two ideas that I will be thinking on more to see if I can create a relatively original story from.
There were a couple of spots on the track I was walking that would definitely be usable, and also a couple of old bits of clothes hanging off branches which got me thinking about how I would set dress (if at all) if I do end up making a kind of horror mockumentary. 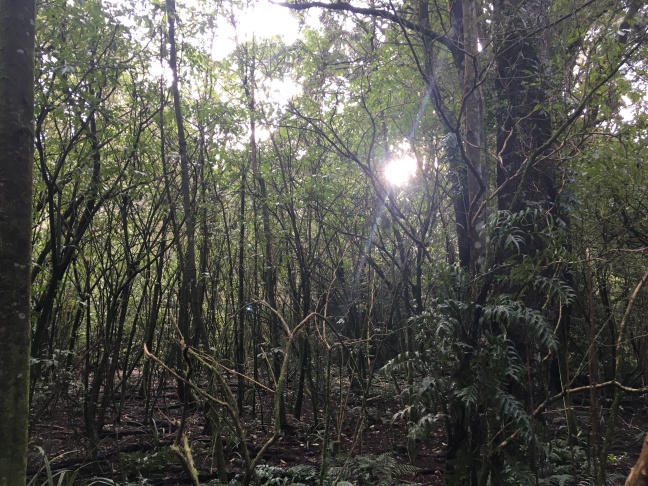 One thought on “BSA231: Locations and Ideas.”